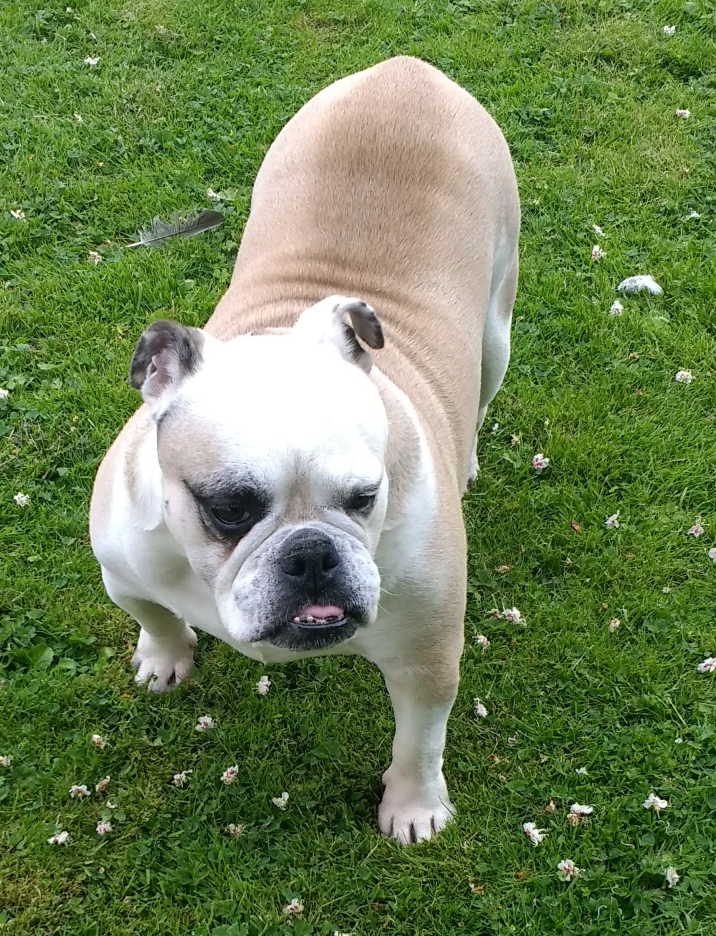 Tiff is an eight-year-old Old English Bulldog who spent the first 7 ½ years of her life living in a small crate in a puppy farm. She was called Bulldog 51. She didn’t even have a name. Due to being kept in a crate she broke all of her bottom teeth off trying to chew her way through the metal.

When Bulldog 51 was originally rescued she was placed in foster care. She was spayed to ensure she endured no further pregnancies and required a major tummy tuck as her tummy was on the floor. As if this wasn’t enough she was diagnosed with a prolapsed womb for which additional surgery was necessary. She was diagnosed with Scoliosis of the spine, had scars all over her body and was terrified of going outdoors, presumably due to the fear of repeatedly being mated on the rare occasions she was taken outside.

In her first home Tiff refused to go outside and so was sadly put in a choker collar and dragged. This caused a nasty and very sore bleeding hole in her neck and added to her fear of the outdoors. Due to all of her fears the first foster carer tried to return her but was unable to do so as the charity responsible for saving her had closed due to lack of funds. This is when I heard about her. Seven-hour round trip or not I felt emotionally compelled to give her the love and care she deserved and needed, and I became her new foster carer with the intent to adopt her.

After a thorough vet’s check when I was advised that her neck would always be scarred and that she would need surgery for her back, I drove her home. Once inside, Tiff was too frightened to go out again. She took quite some time before would even go into the hall way, let alone down the stairs to the front door and outside again.

I tried for up to four hours a day to help her, using high reward treats such as chicken but this had little effect. Then Sue (from Friends Of Baxter Animal Care) offered to give her some Reiki. Tiff had run away when anyone had knocked at the door until now but when Sue arrived she went towards her to say hello. I also noticed that she looked happy when her Reiki session started.

After the first session she went into the hall and down the first set of stairs then came back for a deep contented sleep. Following the second session dramatic advances were clear for all to see. I couldn’t believe it! After over two weeks of refusing to venture out she tootled downstairs and outside. The third session resulted in her being confident to roam around and she has since then happily gone out at least three or four times a day and enjoys going for walks, saying hello to neighbours and has made good friends with another dog. She was transformed in just four weeks and her neck has healed perfectly with no scarring too. Without the Reiki I don’t know if I would ever have got her to go outside. I am extremely grateful and so impressed with Reiki that I booked onto one of Sue’s courses to start learning this wonderful therapy myself.